NOTE: This is a continuation of the story One Night Stand. If you didn’t read it, you might have to read it before continuing with this one.) 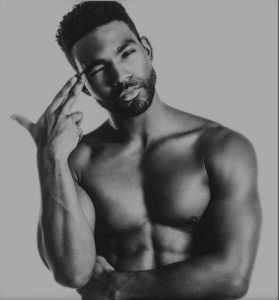 He was a hottie (my least favorite kind of guy). His name was Gite in short for Gitenge or something of that sort. Gite was mid height, well muscled and a bit on the huge side. His best features, I would say were his eyes. I don’t know how to describe them but just say they were cute. They are those eyes that look at a girl and make her feel all wet down there and think of naughty thoughts. Thoughts that run from entangled bodies, sweat dripping, moans given unabashedly, fingers caressing demandingly. You get my drift?

I had spotted him on Tagged after a pal had told me it was the best random hook up zone ever. I saw him and I was hooked. He had been the perfect guy for what I had in mind- directly handsome and on the shallow side with this self-important vibe. The exact opposite of what I would go for the long haul – cute, nerdy, a sapio with a good body to pet. Don’t judge me. There is nothing sexier than a smart guy.

With Gite, all I had done, was stroke his ego, admire him and act like he was a God-given gift to women. And I was floored with him. With no time, I had him. For instance, I knew he was a nice seven and a half inch, thick with this pink tip that begged to be licked with sizable balls that hung snugly when he was erect. They reminded me of ripe mangoes that were ready to be picked and sampled. And tonight, I was going to do just that.

He was dressed as per my request- snug rugged jeans, with a vest and sandals(since he was home). I have always thought there is nothing sexier than a guy dressed like that. Gite looked the way I had pictured ; sexy and eatable. And I loved how the street lights played with his profile as the wind blew his muscular musky scent around us.

Winding my arms around his neck for a second, I raised myself on my toes and whispered in his ears, “Lead the way then if you don’t want us giving the passersby a show. “I licked his ear for effect while wounding myself from him. He knew better than to speak. He just took my hand. The guy couldn’t hide his major turned on state.

He lived in a plot. The houses were lined on both sides. His digs was cool. It was one bedroomed from the look of it. I fell in love with his place. It was simple and classy. I have to admit though, I didn’t get a good look around his sitting room.Apparently, he had some faulty wire or something. So he took me up to his bedroom. It was upstairs.

The bedroom was simple too. A flickering candle burned on a candle stand in the middle of the room. There was a mattress on the furthest corner of the floor. Slow RnB music was playing in the background. From the little I could glimpse, I noticed a medium sized closet occupying the right side of the room immediately when one entered the room.  And in the furthest corner, there was a table and besides it, clothes strewn haphazardly.

“Nice place,” I said flopping on the mattress. “Thank you. I had hoped you would like it .”, he responded looking me over with this glazed look on his face. By the candle light that flickered on his face, I could see why. 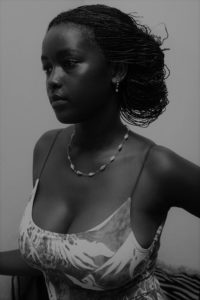 His eyes were stuck on my heaving boobs- my cleave his focal focus. I liked. Leaning forward to remove my shoes, I made sure he got an eyeful. ” So about that red wine I had requested prior this meeting, I would love some. ”  I purred looking at him pointedly. “Or are you going to stand there all night making me wonder if you want to sample or what?”

“Chill Anita will you? Can’t a man admire? You such a freaking vixen all claws and all. The wine is already chilled. Yani you can’t  wait for me to offer?” He asked his face bunched up like an annoyed kid interrupted from playing with his favorite toy.

“I know your fixation with my girls here”,  I pointed my bosom. ” And I know when you start looking you won’t budge. Remember when you told me you are a boob guy when we sex chatted and that’s what got your attention on me?.”

“Yeah I remember. I remember so many things. You can’t begin to imagine how much I have waited for this day. Fantasy don’t do your boobies justice. Or how hot you look. I can still picture you pinching your lickable nipples and how you were moaning while you did it on that video you sent me. Or how you played with your titties while you spread out yourself for me playing with that lush clit. I love  how you such a tease.”

He paused gauging my reaction. The fucker knew what dirty talk did to me. It drove me to lust. And he knew I wanted to be dominated even if I pretended otherwise.

It was getting hot real fast in the room. The flickering candle played with his handsome features. His eyes seemed translucent and filled with this knowledge of what I wanted. I could hear my heartbeat beat with the tempo of the RnB in the background. I could hear Joe singing to me from a far ….Let’s make a love scene…Erotic memories for an audience of two…

And we’ll make a love scene, let the foreplay begin… And replay each moment again and again and

again... Or was he really singing? I was zoned into Gite. He was my only focus. In mind, body. And cunt.

Confidently strolling towards me, “Still want that wine? Or you want to taste my kind of wine? That kind that I know you want more than anything… That kind that I can see you picturing right now -that is, getting you all wet and ready for me down there for me.”

“Someone does want my mouth wrapped around his cock real badly doesn’t he? I know how you just like it Gite. Real slow, creating a build up just before deep throating you isn’t that right?. “Two could play the game. Teasingly touching his hard-on to punctuate my words, I looked him straight in the eyes as I changed my position to a kneeling one. His cock jerked in his snug trousers as he heaved a pleasurable sigh.

“Enough with the games. Now, I  want you to unzip me and take me into your mouth.”, He told me.

“This is what you came for after all. Now let me see what you got.” I knew he was fulfilling my fantasy to be dominated but damn it if I did not feel like I wanted to smack him for ordering me around for just a second!

Home is where the heart is, welcome to Bondo - The Flip Side